The first ever Tech Foosball was a blast! The formula was simple: beer on tap from San Diego’s Mission Brewery, a wide range of munchies, a regulation foosball table, and a bunch of great people from San Diego’s tech industry. Hosted on a Friday night, the event lasted just under 4 hours, but the connections and friendships created have lasted on.

Sixteen teams participated which represented a wide range of internet technology present in San Diego. Each team was seeded into a NCAA style tournament bracket. Rules as followed: Single elimination, no spinning, any goal counts, first to five goals wins ends a game, and best of three games moves on. Each match last roughly 10 minutes. We used a PA system for announcements and an iPhone to broadcast the game at table level to an Apple TV projected on the wall.

Each team laughed, cried, yelled, and fought valiantly. Teams were very competitive, but not without sportsmanship and great spirit. As teams waited, they had time to meet another, which made it a fun natural networking event. Here is a summary of some of the companies represented on the table: UberFood, a seasonal organic to your door food service. TinyFactory, creators of Brandisty. EFM, a full service agency downtown with clients like Mirage, Sony, and Qualcomm. PopChatr, an app that is like twitter for audio. Sweet Labs, an application distribution service. Monk Dev, a CMS for churches. AirBitz, a bitcoin wallet. GrowConnections, business networking automation. Slacker Radio, free online radio. Digithrive, web and mobile application developers. Zesty, a cloud based website platform. Vestidd, an info organizer and sharing tool for parents with special needs children.

The Finals Were Intense

Aaron of Slacker Radio with Mike of EFM were a sleeper match up that played some serious games to end up in the finals against Etienne & Beau from Monk Dev. To move onto the finals Etienne and Beau defaulted a win against Travis Fawcett of Pathway Genomics & Phelan of Digithrive due to time constraints. The finals came down to the last goal of the third game. Monk Dev walked away with all the swag, and they were left speechless! 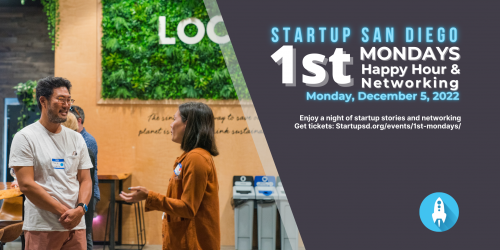 Our in-person 1st Mondays community building events are back! Network with some of the best San Diego entrepreneurs, founders, investors, and community members. Join us for 1st Mondays–holiday edition at Rough Draft Brewing Company Miramar! For the month[...]
View Calendar
Add